Recently in the BHS auditorium, cheerleaders chanted support, performed cartwheels and human pyramids, and the marching band pumped out tunes akin to those at the Friday night football games as BHS Principal, Chris Jennings, led the recognition of talented students who pledged to take Advanced Placement (AP) classes in biology, calculus, computer science, English language and composition, physics, statistics, U.S. Government and U.S. History, as well as the AP tests at the end of the year.

BHS students who signed the pledge gather to be recognized.

Jennings thanked the Bloomfield Educational Foundation and the entire BEF Board for making the project possible with a pledge of $250,000 to purchase the SAT prep classes for all students wishing to take the college entrance test, as well as AP class tests, whereby students earning a score of 3 or better can earn college credit.  The credits earned may be applied to their freshmen college tuition bill thus reducing the bill by the number of credits they earned.

“Today about 300 students signed the AP banner, and pledged to take the classes and the test at the end of the year.  We all chanted Five, Five, Five, to pump up the students and get them excited about earning a 5 on their tests,” explained Jennings. “This program has grown each year in popularity and the students are challenging themselves by signing up for the classes, doing the work and taking the test at the end of the year.  Hopefully they will all be rewarded with college credits as the result.”

Every AP class teacher called their students on stage where they were formally recognized by ovations from the cheering team and the audience and were treated to rousing football fight songs by the marching band.

To learn more about the results of the program to day, click here. 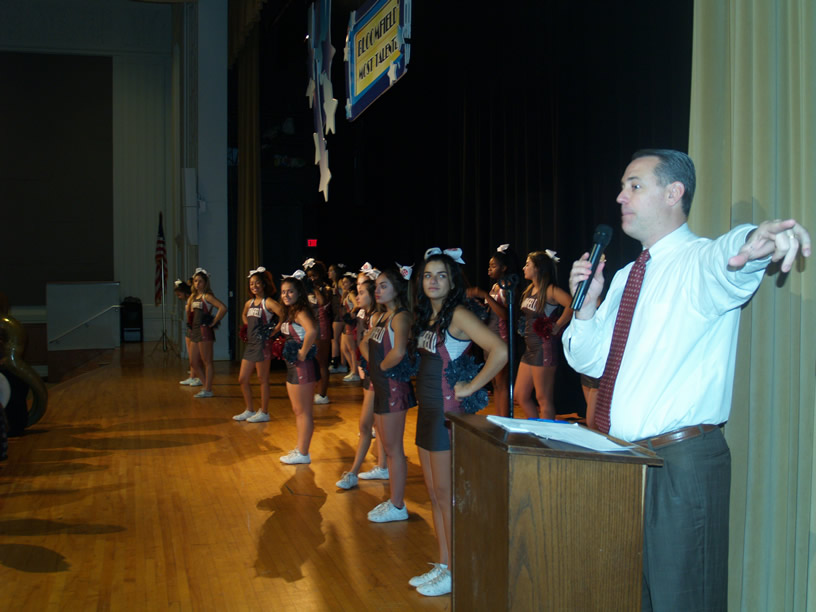